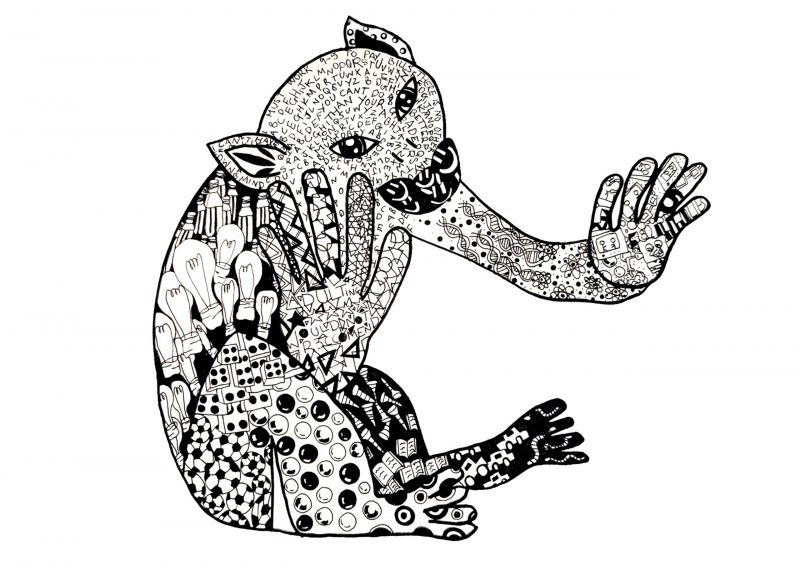 Hey guys, I just wanted to do a quick blog about my latest art piece “inner child”. With this piece I wanted to be inspired by nature. I chose an animal that made me feel energetic, one that was fun and playful like we were before we hit adulthood. I chose this monkey that I had seen at one of the zoo’s, I think it was Paignton zoo actually (don’t quote me on that though haha). He caught my eye as he looked so happy and he seemed to have a lot of energy.

I always fill my art with doodledesigns of nature however I didn’t want to use floral doodles in this piece, not even one. I wanted to fill this animal with unique patterns, ones that made me think of monkeys and had a deeper meaning behind them. For example, I used lightbulbs and screws to shine through and say that monkeys are screwed on and intelligent animals. I also wanted to include ideas of a child’s mind: cars, worms, footballs, shapes, Lego, bubbles and books. I wanted to have ‘inner child’ doodles all over this piece. If you look closely you will see some words and phrases are hidden amongst the pattern. I wanted to say my feelings/ opinion on why we struggle when we get to an adult through my art, but by using words as well as doodles.

I decided to add more of these designs on one of the hands to represent control. The TV like drawings represent how we can be seen as being programmed, the image of SpongeBob pushing down on a brain to further re-enforce this lack of control and I also added the word ‘lies’ in small to symbolise that it can be hard to overlook the bigger picture. I wanted to say that the things we take in from the tv, news and the internet could be brainwashing us. Is this when our inner child (our true selves) starts fading away?

Perhaps if we went to school and were supported in the areas we were good at and learnt to be the best version of ourselves instead of teaching us unnecessary things and making us feel that we are worthless if we don’t fit the criteria they teach, making us feel like we should have it together and know what we’re doing by the age of 16, would we still have that inner child? Would we feel happy? Would we actually like going to school? The fact that the majority of children don’t like going to school and following the same programme of education suggests that maybe it’s the system that is failing and not the children.

I also chose to add DNA like patterns on the arm, as if drifting away from the body and mind. This is to resemble this idea of losing apart of ourselves and not knowing how to think for ourselves without having a set routine. To symbolise societies ideas of emotions I drew smiles on the monkey’s nose as that’s all we are really doing isn’t it, were just putting on a smile for the world.

If you feel lost or like you’re not doing good enough, just pause for a second and remember you’re only human and every single one of us are different in our own way.

Find your strength’s and push to become the best version of yourself.

The Dragon in you

We use cookies on our website to give you the most relevant experience by remembering your preferences and repeat visits. By clicking “Accept”, you consent to the use of ALL the cookies.
Cookie settingsACCEPT
Manage consent

This website uses cookies to improve your experience while you navigate through the website. Out of these, the cookies that are categorized as necessary are stored on your browser as they are essential for the working of basic functionalities of the website. We also use third-party cookies that help us analyze and understand how you use this website. These cookies will be stored in your browser only with your consent. You also have the option to opt-out of these cookies. But opting out of some of these cookies may affect your browsing experience.
Necessary Always Enabled

Any cookies that may not be particularly necessary for the website to function and is used specifically to collect user personal data via analytics, ads, other embedded contents are termed as non-necessary cookies. It is mandatory to procure user consent prior to running these cookies on your website.